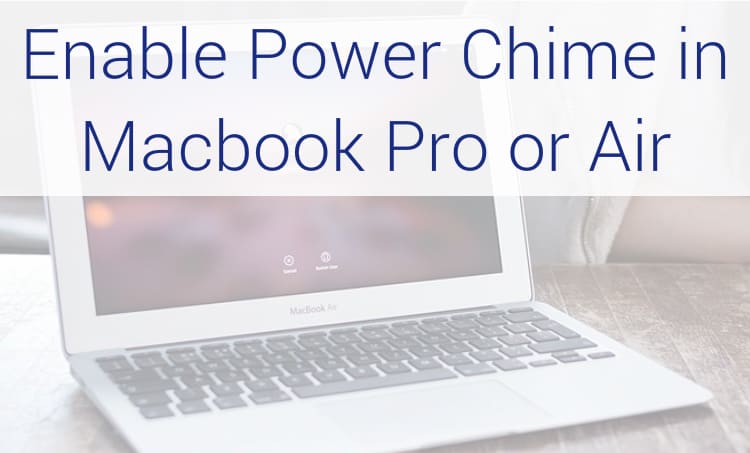 You might have heard the tuneful sound everytime you plugin for charging in the New MacBook which was released in 2015. The chime sounds every time when the device is plugged in just like it does in iPhone or iPad. Although the sound causes because of the PowerChime app which is available in MacOS and can be used in any Mac yet the feature is enabled by default in MacBook only.

However, if you have Macbook Pro or Air, you have to do a little work around as this feature is available but somewhat hidden. So, in this article, we thought to come up with a solution that will help you to enable chime sound while you plugin your Macbook Pro or Air.

Without further adieu, have a look at how to enable chime sound while plugin your Macbook Pro or Air.

How to Enable the Power Chime in Macbook Pro or Air?

In order to enable the PowerChime.app on your MacBook Pro or Air then you need launch the terminal and put a single command.

Once the Terminal is open, copy and paste the command given below

It seems a bit complicated but actually it isn’t. Let us give you the breakdown of the above mentioned command line.

After pasting the above mentioned command in the terminal, press Enter. When the command runs successfully, the service gets activated and you hear the tuneful sound each time when you plug your MacBook Pro or Air in.

How to Disable the Power Chime in your Macbook Pro or Air?

Since we are giving you the information about enabling the service, we should also let you know about the process to disable it because there is a possibility that after some time it may start annoying you. If you decide to get rid of it, then you need to do that again from the Terminal.

This time copy and paste the command which is given below to revert the process.

as you can see the first line is command is almost similar to the previous command and there is only one difference and that is ‘false’ instead of ‘true’. In the second line which begins after the; you will see ‘killall PowerChime’ which tells your Mac to turn off the PowerChime application.

So, this is how you can turn on Power Chime function on your Macbook Pro or Air. This was easy, isn’t?

The MacBook Pro and Air come with MagSafe charger in which a visible light can be seen when the device is plugged in. However, the previous MacBook, which was released in 2015 didn’t have this feature. Instead, there was a USB Type-C charger to resource power that’s why the device had this Power Chime feature to let users know that the computer is charging.