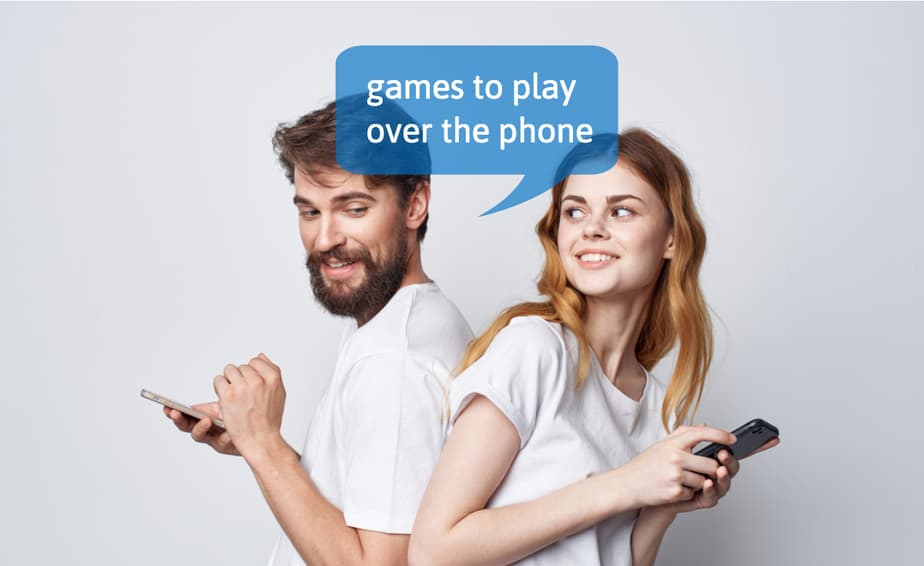 Time and distance can sometimes become a hurdle to feel a close proximity to a friend, especially a girlfriend or a boyfriend. If you are bored or feeling shy, get engaged with your friend over your phone! Texting and conversation games not only put a stop to all these woes but also bring you closer to them. Some games are quite fun texting while others bridge the gap between you and your friend. You may laugh and giggle and have a lot of fun. Here is a great list of such games to play over the phone, with most of them taking place via text messaging.

This is a fun game in which most people have played in their childhood but is text based (versus this one that works well for when you are in the car). In this game, players set a number of points for each word and the first player texts an array of underscores each denoting a letter of the subject word. The other player assumes a letter that they feel to be the part of the chosen word. If the assumed letter is correct, the first player puts the letter in one of the underscores that fills the slot. In case the assumption is incorrect, the player loses a point. Whosoever wins will choose a different word. The game induces all players to think harder.

This game is great for enhancing the vocabulary skills of the people playing. It reduces both boredom and stress. It is a simple game wherein players choose a random word that needs to be separated and its letters are rearranged to form a maximum combination of words possible. Players may choose a time frame mutually agreed upon that varies from five minutes or longer. Whoever makes a greater number of words is declared the winner.

This game is usually played face to face but can also be done over text. This game truly reveals the nature of your friend. It is played with a question that starts with “would you rather?” and followed by presumptive circumstances (lots of great ideas for questions can be found in this book). They can be interconnected or aloof. However, both the options carry the same importance. The question should be creative yet the best questions are those which represent awkward but fantastic options. This is a good game to get to know oneself but funny and absurd at the same time. Examples for the question might be “would you rather live rich or become a saint with no money for the entire life?”.  Just make sure your cell carrier offers free text messages as this one can cause you to go back & forth for quite a while!

This is quite an old game but a classic (based on this family boardgame) one based on logical reasoning that has made a resurgence as of late, mainly due to people deciding to play it over text messaging.  The game is played between two people. The methodology of the game is that one player has to choose an object (an animal or a person) and the other player has to guess the answer within twenty questions. Once the subject is chosen by the player, the opponent has to put a series of questions through texts in order to close down to the answer. The answers are to be in the form of a “yes” or “no”.

Never Have I Ever

Normally this game is played with multiple players but it can also be played between two players. It is a getting to know you game and reveals the true nature of your friend. The players will make statements about what they have never done before taking their turns. Every time a statement is made in contrast to their experience, the opponent loses a point. The questions and answers can extract some of the dark secrets of the players involved.  Consider yourself warned before starting this game with a friend over text!  If you’d rather play the at-home version with your mature friends, you can check out this version.

This game is most enjoyed by people who have a love for music. It is a texting game that fills people with lots of fun by removing all the boredom. The mode of playing the game is that one player texts quoting a few lines from the song to the opponent. Else one player also can text some dialogues from a movie. The opponent has to guess the song or movie from which the lines/dialogues have been taken. Failing to guess the right answer will warrant the opponent to sing the song/complete dialogues, preferably over speaker phone and not via text.

This is a great game for writers and can be played between two or more players. As we say, joint thinking is far better than the thoughts of a single person, and this game uses the same principle. One player texts the beginning words of a sentence and the other player reciprocates with another word, sentence. Another player will text another word, sentence and the game progresses there on. All the words put together will form a story that may be an epic or a nightmare.

This game also can be played facing each other. The players can text their pictures to each other while choosing a dare. Such pictures may be deleted later. It is normally played in social gatherings but can also be enjoyable playing over texts without losing the fun quotient in it. If the player chooses truth, he has to answer the question truthfully. In case dare is chosen, the camera of the player should focus on the evidence of the dare. The beauty of the game is that all the truth will be exposed. However, the questions should not be offensive so as to hurt the feelings of others.

This is a fantastic, fun texting game to play over the phone where you select a topic of conversion and you need to talk about it for a minute. It looks very simple, but you are not allowed to deviate from the topic at any time and should not repeat any word more than once. This game enhances the oratory skills of a person as well as the knowledge of their words, not to mention it may lead to improvements in your overall texting speed.

Fill in the Blanks

This is a game which can be a little bit of flirting while texting your boyfriend or girlfriend if you are comfortable with doing this. It can be fun in case you have not met your friend for some time. One player starts with a sentence about himself/herself but leaves a word blank for his/her partner to fill it up. The good element in this game is you leave your partner thinking about you that amounts to a little bit of flirting but fun. However, nobody should spoil the tempo of the game by texting absurd statements.

Please let us know if you have other fun texting games over the phone that we haven’t mentioned here.  Almost any game can be turned into a text game if you think about it enough.